Posted on February 21, 2012 by garyrubinstein

After critiquing the 3rd grade test, I saw a comment on Twitter that I was someone who had low expectations.  This person said that he could do questions like that when he was in 3rd grade.  I have no doubt that there are some kids that can succeed at a test like this, even one with flaws.  If these tests were not being used to justify shutting down schools and firing teachers, I wouldn’t take so much time to point out what I see as unnecessarily confusing and difficult problems.  A skill I’ve worked to develop as a teacher is to look at a question and try to imagine how that question would look to me if I was not a math teacher, but a student.  If you’re an adult looking at these questions, they might seem easy to you (or maybe they don’t), but to assume that they are easy for 4th graders is another thing.  As I don’t teach that grade, I don’t consider myself an expert on what 4th graders are supposed to be able to do, or what they are developmentally ready to do.

I know a lot about standardized tests since my first professional teaching job was not when I started in 1991 with TFA as a 21 year old rookie, but when I worked as a 19 year old college student for The Princeton Review in Boston.  I got to learn that something strange happens in a kid’s mind, even a 16 year old high school junior, when they take a standardized test.  They read the question, and then the choices, and often, a choice just ‘jumps out’ at them.  Then, without even thinking, they write that answer.  With young kids who are in 3rd or 4th grade, it is even worse.

My point in these critiques is also just to expose people to the sorts of questions that are on these state tests.  People assume that math is something that is very clear cut while these questions show that there is a degree of subjectivity and also reading comprehension involved.

So here are 12 out of the 48 questions on the 4th grade 2010 NY math tests that I have comments on.  I hope people don’t just take from this that I have low expectations.  I really think these questions are too hard for reasons I outline below. 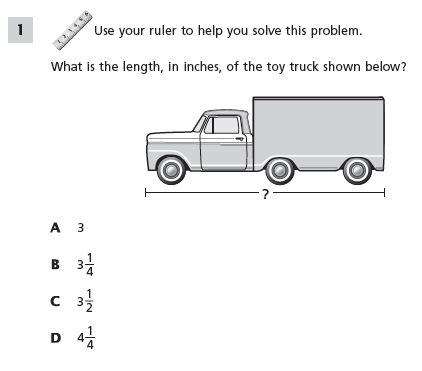 If they choose to measure the truck, rather than the line, and the have the ruler at a slight angle, it is very easy to be off by a quarter of an inch.  They would lose full credit despite being able to read quarters on a ruler. 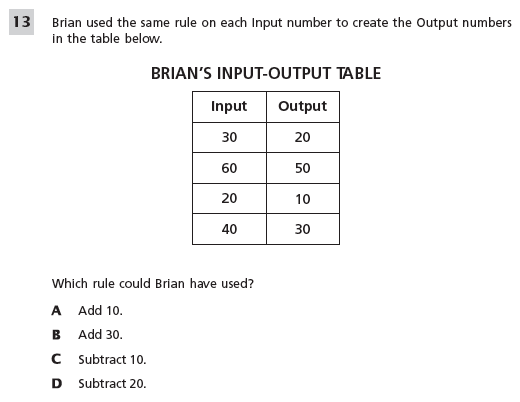 I’m not sure if these Input/Output tables are a part of their curriculum.  When I was in 4th grade, I don’t think we did anything like this. 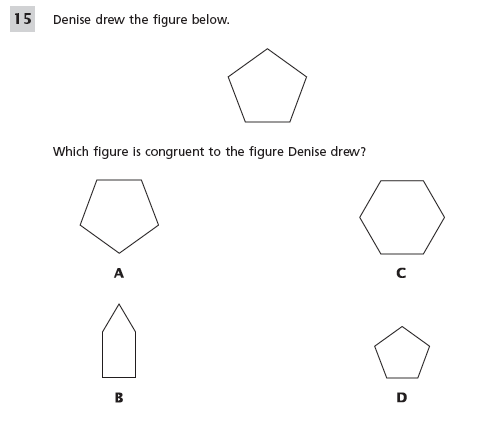 A similar question was on the 3rd grade test.  I could see someone writing ‘D.’  Knowing the word ‘congruent’ doesn’t seem that important at this stage of their development.

This is, I guess, supposed to test that they understand the place value system.  I think it is confusing for a 4th grader.

I suppose the question is ‘fair.’  I just don’t see the point.  Why is a 4th grade teacher’s job depending on her students being able to answer this question?

I guess it depends on what you consider to be a ‘large’ fish tank. 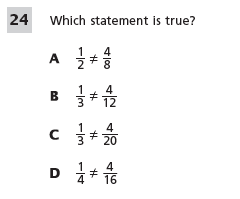 A lot of double negatives here.  For A the thought process would be “Since it is NOT true that 1/2 does NOT equal 4/8, I should eliminate choice A.”  I think, for 4th graders, the better question would be to give three incorrect equalities and one correct one and ask them to find it. 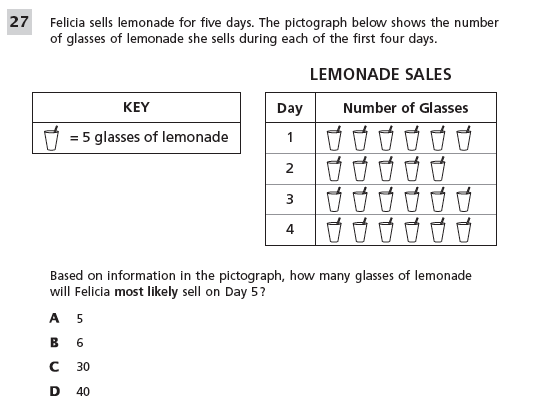 This answer (C) is based on a fallacy.  What they want the 4th grader to infer from the four days is that three out of every four days they will sell 30 glasses and one of every four days they will sell 25 so it is most ‘likely’ they will sell 30 glasses on a given day.  But what if a kid interprets this as a pattern question?  They see 30, 25, 30, 30, ?.  I could make a case for 25 coming next, like it is some kind of alternating pattern.  When 25 isn’t a choice, a kid might write A since there are 5 cups in the picture.

They are careful to put the ‘best’ in bold.  I think that kids should be able to ‘estimate’ small numbers of things.  For example, the number of strings on a guitar is somewhere between 3 and 10.  For certain purposes, that would be a sufficient approximation.  Same thing for the number of seat belts. 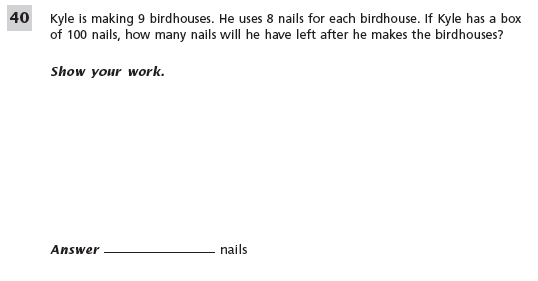 Would they get part credit for calculating 8*9=72 without then subtracting from 100? 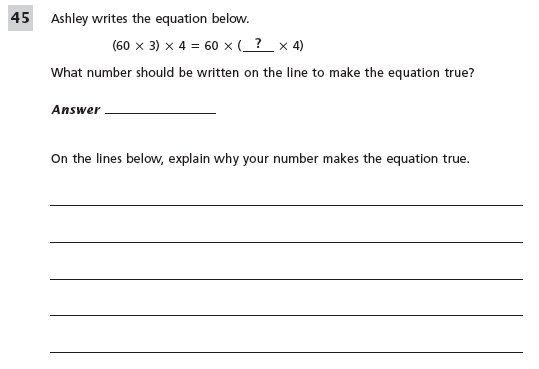 This entry was posted in Research. Bookmark the permalink.