When used appropriately, technology can really make things better.  It can also be a big waste of money.  In my math class, I have incorporated an incredible computer program called ‘The Geometer’s Sketchpad’ which first came out in the early 1990s.  With this program, which only costs about $10 per student, I’ve developed activities that encourage critical thinking and collaborative problem solving.  My students have also benefited from my class website where they can download any handouts they lose or were absent for, in addition to all the homework assignments.  I can even email an entire class with the push of a button to clarify something from class that day.  These things have made me a more effective teacher, and they have been practically free.

The School of One is a technology that was hailed by TIME magazine as one of the 50 best inventions of 2009.  By harnessing the power of computers to analyze the skills of students, the computers could create customized learning plans for each student, and find an efficient way to match the students with teachers to maximize learning.

I visited the School Of One in the spring of 2010, during the initial pilot program.  I am (or at least ‘was’ until I wrote this post) friendly with the Joel Rose, the former ‘CEO’ of School Of One, and I asked if I could go to one of the tours.

Before we got to see the school in action, we got a brief summary of what we were about to see.  The concept was that the old teacher-centered model was ineffective.  One teacher would have 30 or more kids.  Some of those kids had the prerequisite skills for the planned lesson, and others didn’t.  So the teacher would struggle to ‘differentiate’ across all the different starting skill levels.  That was true.

So the School of One would alleviate this by having a large room where five different lessons would be taught simultaneously.  Some students would be taught by teachers in large or small groups, depending on what skills they had not yet mastered.  Others would work on individualized lessons at computers.  This would enable the teachers to get the most out of their direct teaching time as students would not participate in a lesson that they were not ready for.  Sounded pretty good to me.

Though the school had only done a small pilot program in the summer of 2009, they claimed “Students in summer school pilot acquired new math skills at highly accelerated rate: estimated by NYC Department of Education’s Research and Policy Study Group as 7 times faster than peers with similar demographics and pre-test scores. Small sample size (n = 76) was a limitation.”

I peered over the shoulder of a student working on a computer and saw that the skill he was practicing was to take sentences like:  “three less than t” and convert them into ‘t-3’.  As this is one of the more useless skills in all of middle school math, I was disappointed that they didn’t take the opportunity to drop a few topics in their reinvention of math teaching.

I also noticed that very few students were doing any scrapwork for any of their problems.  This reinforced my own experience in trying to learn things on the computer, like when I tried to learn music theory that way — it is tough to take a computer seriously when it tells you to do something.

I also noticed a lot of kids playing games.  The games came from a website called coolmath-games.com (Real slogan:  Come for the games, stay for the lessons).  The three most popular (click on links to play the games and see how much math you actually do while playing them) were 1) a pac-man game called math-man where your pac-man tried to clear the board of dots while avoiding ghosts.  The ghosts had numbers on them, and you could eat the ghost with the answer to a math question at the bottom of the screen — or not 2) a game called Bloxorz where the player moved a rectangular box around a maze, and 3) one from math-play.com where if you got a multiple choice question right, you could try to make a basketball shot.  Part of the idea of individualized learning is that some students will go at an accelerated pace.  But from what I saw, if kids finished early, they were allowed to play these math games.  Unfortunately the games had very little math.  I watched a kid play math-man for fifteen minutes without answering a single math question.  In this screen shot, you can see that the question 83 divided by 1 is at the bottom so if you really want to do the question, you can eat the ghost with the 83 on it, or you could just avoid the ghosts and eat all the dots. 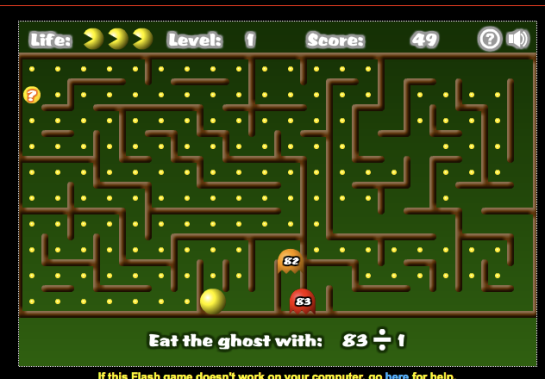 The best thing I saw was the small group instruction, something that I know is effective, where a teacher was working with about 8 students on a math concept, giving each student individualized attention.

Ten minutes before the math period was over was ‘assessment’ time, where each student went to a computer to take a multiple choice test to inform the computer if they would be ready for the next concept tomorrow.  Just like I saw during the lessons, I watched a student do the entire multiple choice test without lifting pencil.  As there were only 4 choices per question, he may have even passed, but it is doubtful he truly knew the concepts.

I left School of One feeling a bit funny.  It seemed like there were some good things about it.  Certainly a computer sorting students into ability groups does make it easier for a teacher.  Also computers grading work is helpful.  But the major flaw that I considered a missed opportunity was that in the design it seemed that their main ‘goal’ was ‘test prep.’  If I were to use millions of dollars to ‘re-invent’ the math classroom, I would want to develop a better vision of what the goal of studying math was.  As they were clearly focused on test prep, the entire enterprise, in my opinion, was limited.  Even if they succeeded at getting test scores up, that superficial goal would be all they really accomplished.  There was not one bit of ‘critical thinking’ going on there.

On the tour with me was the founder of Mathalicious, who was just getting started back then, but has since been getting pretty popular in the world of internet math people.  He seemed as unimpressed as me so I talked to him and asked what he thought.  He said “I’m worried that this is what kids will think math is about,” which I agreed with.  The technology, I admit, was pretty new and maybe ‘critical thinking’ can be infused later with better lesson content.  I don’t know if that was part of the long term plan.

My visit was in the spring of 2010.  They were doing the spring pilot at IS 228.  Then they were going to expand to two more schools for the 2010-2011 school year, and then to four more schools the next year.

I checked the school report progress reports to see how math scores were affected by using this program.  I know that these numbers aren’t as meaningful as the DOE hopes they are, but I have no problem using them here since these are the numbers they value so much and it is always ironic the way the DOE chooses to ignore numbers that don’t fit with their theories about what will help the schools.

In 2009-2010 had a 62.7% in their math median growth percentile, which was enough to help the get an ‘A’ on the large ‘progress’ component of the progress report.

So of the three schools, one went up on their math progress while two went down.  Two schools dropped the program, including the one school that showed ‘progress’ with it.

Within a year, Joel Rose and Chris Rush, the two main people working on School of One, re-emerged with a new company called New Classrooms Innovation Partners, which will work with cities, including New York City — where they will expand to 50 schools within the next three years.  Though New York City is not immediately giving them a lot of money, this article  questions whether or not this violates the conflict of interest laws.

Former Chancellor Joel Klein who now works for News Corp has just started an ed tech venture called amplify which I believe is working with New Classrooms Innovation Partners in some way.  I haven’t found a direct link between the two companies, but it would seem strange that Klein would be competing against people who he mentored.

As I’ve said, I do think that computers can be used to help teachers work more effectively.  Whether or not this technology will accomplish much is yet to be seen.  As it does not seem to be based on any vision of making math a more interesting or more meaningful experience, I am skeptical.  If the common core standards truly are about making math no longer ‘a mile wide and an inch deep’ I wonder how this framework can be adapted to enable deeper understanding.

I guess the 50 schools in New York City that will get the ‘opportunity’ to participate in the field tests will soon find out.

This entry was posted in Teach For America. Bookmark the permalink.

22 Responses to School Of One