Posted on November 5, 2013 by garyrubinstein

Today TFA released their annual letter.  Looking at the announcement of the letter on their website, I saw this image, which shows all the aspects of TFA’s influence, though, to me, it looks a lot like what you see on the wall of a police department as they are investigating a crime and hanging up pictures of all the leads with their connections to the other leads. 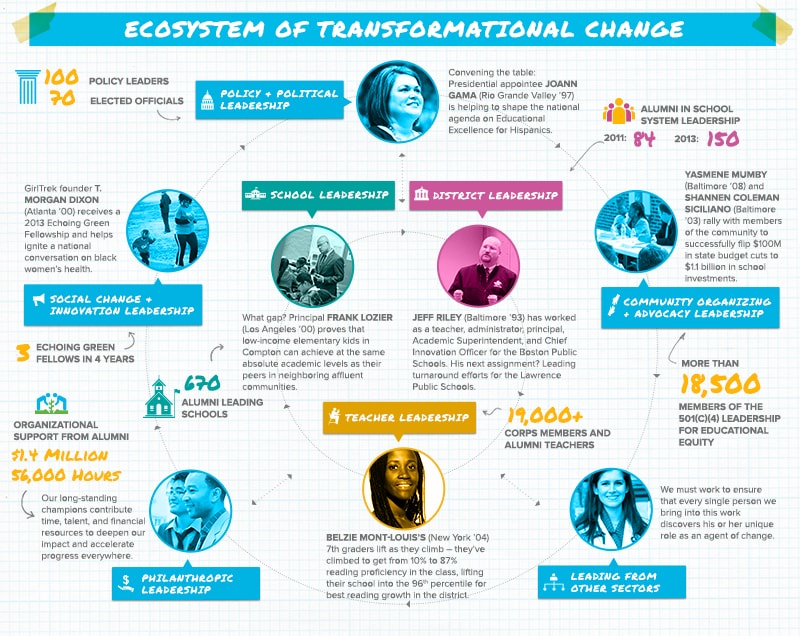 Of course there are the typical ‘miracle’ stories that TFA likes to use in fundraising, recruiting, and in gaining power and influence through inflated claims.  And of course the measure of a successful school and teacher is nothing but standardized test scores.

It’s funny because if they were smart they would tap into all the other types of success which aren’t as easy to quantify, but are still impressive.  Like a corps member who starts a chess club at her school or a Jazz band or takes her kids on a trip to Finland.  If they used those types of stories as their anecdotal evidence that their teachers are making a difference, I don’t think many people would be too upset about that.  But ‘test scores’ are the obsession of the ‘reformers’ so that is what they tout.

I haven’t read the letter yet, but I will when I have more time and energy, but for a quickie, I thought I’d investigate one of the miracle teachers on the image.

I researched this claim on the Massachusetts Department of Education website and it does not seem likely.  Belzie Mont-Louis is likely a fine teacher.  She teaches 7th grade ELA at Orchard Gardens Pilot School in Roxbury, Mass, according to their website.  Looking at their 2012 and 2013 report cards, it does not seem likely that her students came to her with only 10% passing.

The 6th graders in 2012 had 46% passing, and there aren’t so many teachers there so it isn’t mathematically likely that her 7th graders entered with just 10% passing.  If there are two 6th grade ELA teachers and half the students had 10% of them passing, the other half would have to have 82% passing.  Also notice that at this school 0% passed 5th grade science, which would lead me to infer that they focus on math and ELA test prep at the expense of other subjects.

So they had 62% passing the 7th grade ELA test, which is better than 46%, for sure.  It is possible that there are two teachers and she got 87% while the other got around 47% passing, but since the sixth grade scores were not 10% (maybe they had 10% passing in 3rd grade, but that is not what the graphic is implying) so this claim is certainly inflated.

There is also reference to a miracle school in California whose principal is a TFA alum.  They say “Students at Principal Frank Lozier’s (Los Angeles ’00) Compton school, Laurel Street Elementary, prove that poverty is not destiny. Their state achievement scores are on par with those of students in neighboring affluent communities.”  I always get irritated when the “poverty is not destiny” card is played.  Test scores seem good at this school, but if anyone wants to investigate for me and write your findings in the comments, I’d appreciate it.

This entry was posted in Research, tfa rants. Bookmark the permalink.