Whatever Happened To KIPP?

Posted on January 22, 2016 by garyrubinstein

The KIPP network, founded by two 1992 TFA alumni, was once considered the ‘gold star’ of charter chains.  For a while their growth seemed inevitable, almost exponential.  They were all over the press, on Oprah, in Waiting For Superman, even present at the 2000 Republican National Convention.  But over the past two or three years, we haven’t been hearing that much about them.  Their growth seems to have flattened out and there has not been much press coverage of note.

In a recent blog post by Alexander Russo at ‘The Grade’, he wrote:

But KIPP charter schools seem like they don’t get as much media attention these days, do they?  That’s the impression I and some others have.  The thought made me wonder whether KIPP coeverage was down as steeply as it seemed, and if so, why?

One obvious reason for the relative lack of attention in recent times is that the network isn’t shiny and new any longer (like Altschool) or headed by a hard-charging leader (like Eva Moscowitz).

The article then goes on to say that there is actually more coverage, but a different kind of coverage, and that they have lessened their ‘no excuses’ philosophy and have shortened their extended days so they’re not so controversial anymore.

It is funny that Russo doesn’t ever speculate that maybe a chain like Success Academies is getting so much more attention is not just because they have a ‘hard-charging leader,’ but because KIPP is not getting the ‘outcomes’ that reformers require.

Many KIPP schools are 5th through 8th grade, so it is hard to do an ‘apples to apples’ comparison with the Success Academy schools which begin in kindergarten.  So what I did was download the recent state test data for all the New York City Charter schools and examined just the ones that had kindergarteners in 2011-2012.  Those students, now in 4th grade, took the 3rd grade tests last spring.  In theory, at least, since all the schools have the same type of lottery, the incoming kindergarten classes should not be that different.  Then after having those students for four years, their 3rd grade test results should be comparable to the ‘growth’ those students made over the four years.   So comparing KIPP to the other 100 or so charter schools that had 3rd graders last year presented an illuminating graphic which could help Russo and others understand why we are not hearing so much about KIPP nowadays. 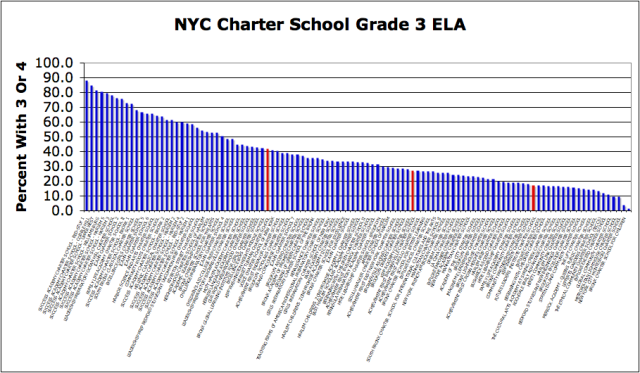 For Russo to ignore the uneven outcomes of KIPP schools as a possible reason for their recent lack of attention is odd, but not surprising as reform cheerleaders are often blind to any objective evidence that does not support their narrative.

In New York City, all the KIPP schools funnel into one high school.  I actually visited that school a few years ago and witnessed for myself that mediocrity.  About two years ago that school moved into a brand new state of the art building.  Yet, we hear nothing from KIPP about the amazing things that are going on in that building.  Do they have a debate team, a chess team, a math team, some Intel semi-finalists?  Sometimes I’ll see a Tweet about how out of all their schools in the country there are five KIPPsters attending Columbia or something like that.  It’s never clear if this is a high number or the number you’d expect.  I guess the implication is that without KIPP none of those five students would have accomplished anything in life.

20 Responses to Whatever Happened To KIPP?