Posted on October 6, 2016 by garyrubinstein

Last week I wrote a post about the latest exaggerated claim about the success of the P-Tech high school in New York City.  P-Tech is a ‘miracle’ school that Joel Klein is very proud of and even Obama once touted it in a State of The Union address.

If P-Tech students really were proficient in 9th grade Algebra I, then they should perform nearly as well in Geometry since it is the next course.  But their 1.6% getting college ready in Geometry is a relevant statistic I think since if they peak in 9th grade (advanced 8th graders often take the Algebra I Regents, actually) that would not make someone ready for college after graduating.  So I showed in a scatter plot that P-Tech had the lowest Geometry scores, by a wide margin, than any other schools that had a comparable generic ‘college ready’ in math score.

The principal of P-Tech responded:

So to address this concern that my comparisons were unfair, I produced two new scatter plots.  One compares percent of Black students to percent of students scoring ‘college ready’ in Geometry.  P-Tech is the yellow dot.  As can be seen, P-Tech is hardly an ‘outlier.’  It is actually one of the lowest performing schools with between 80% and 90% Black students. 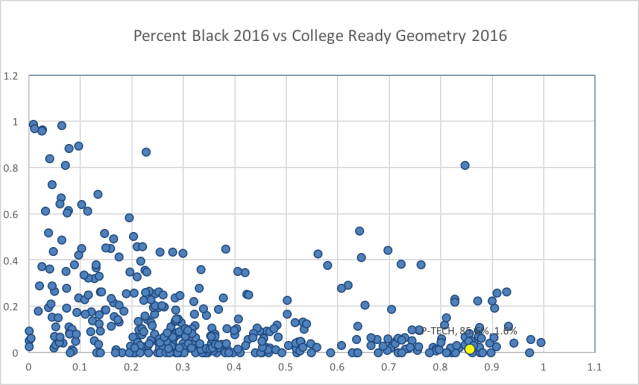 Then I made a plot comparing incoming 8th grade scores to Geometry college ready percentages for all high schools.  Again the P-Tech yellow dot is way at the bottom, even for other schools whose incoming students had 8th grade scores around 2.3 like theirs.