Does KIPP Deserve To Expand In Philly?

Charter schools are a large component of the modern education reform movement.  In theory, the charters will get better results because with the added autonomy they get, there is also added accountability.  A charter school can lose its charter for poor performance.  ‘High performing’ charters with a proven track record will also have the opportunity to expand while ‘low performing’ charters will not have their charters renewed.  This survival of the fittest as charter schools compete with each other and with the public schools will, supposedly, cause the school system to evolve more quickly than the incremental improvements of the traditional school system.

KIPP is one of the largest and best known charter networks in the country.  There are currently five KIPP schools in Philadelphia, two elementary schools, two middle schools, and one high school.

An article recently ran on the Philadelphia Website called ‘The Notebook’ about KIPP’s applications to expand and how some in the community are skeptical because of the poor performance of the KIPP schools.

I looked at the recent school report card for their one and only high school, KIPP DuBois High School.  Though they don’t have letter grades, they do have six levels with different symbols that are essentially an A to F scale.  That school got the lowest possible rating, essentially an F.  Not only were their test scores low, but they also got the lowest possible rating in ‘growth’ in math and reading, in other words the value-added for the school which reformers claim to take very seriously.

But of course KIPP has a response to this, from the article:

KIPP’s CEO, Marc Mannella, has acknowledged publicly that some of its academic indicators have been disappointing. But KIPP officials cite evidence that its schools have had success in steering students to college.

Specifically, they say, the first 8th-grade class from KIPP’s original middle school, which graduated in 2007, boasted 35 percent of students obtaining four-year college degrees 10 years later, compared to a 9 percent rate for low-income students nationally. The result is for a cohort of 35 graduates.

I hear this a lot from KIPP with their ‘to-and-through’ college initiative.  Years ago I saw this ad on the New York City Subway. 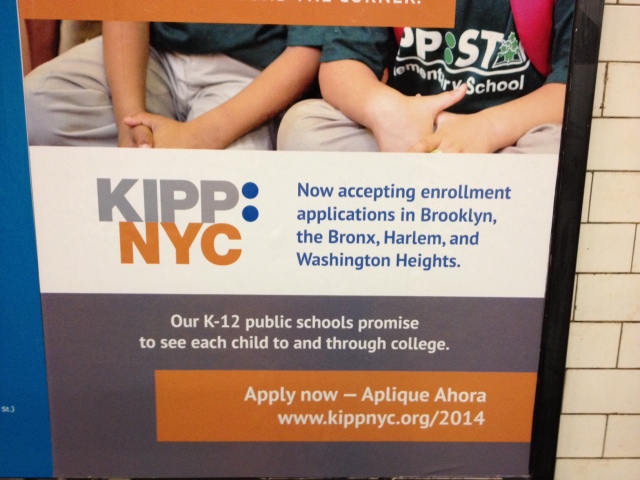 This is quite a promise since many students who begin KIPP don’t even make it through 8th grade there.  But here they are making a promise ‘to see each child to and through college’ which seems like some kind of false advertising, I don’t know exactly what the laws are about this.

KIPP often boasts that for low income students, only 9% graduate college while in some of their networks they have even 40%.  Generally this 40% does not account for students who did not complete 8th grade there so it is not an equivalent comparison.

A few years ago I had an interesting interchange with Richard Barth, who is a co-CEO of KIPP, about this:

So clearly they aren’t interested in having a true debate using data.

So when it comes to Philadelphia with all the poor results from KIPP, the officials there have come up with one statistic that proves that they succeed at getting their students to and through college:  “the first 8th-grade class from KIPP’s original middle school, which graduated in 2007, boasted 35 percent of students obtaining four-year college degrees 10 years later, compared to a 9 percent rate for low-income students nationally. The result is for a cohort of 35 graduates.”

The first thing that is unusual is that the cohort, it says, was just 35 students.  That is not the normal size of a cohort.  So 35% of those 35 students, or about 12 students, have graduated from college and since 35% is four times 9%, that is an amazing thing.

It sound like KIPP wants to double the number of schools from 5 to 10 and almost triple the number of students they serve.  My hope is that the charter authorizers can learn that even the one seemingly bright spot in their data is nothing more than a lie generated by KIPP’s PR department.

4 Responses to Does KIPP Deserve To Expand In Philly?