What Happened To The Math Regents? Part II

For the past few years in New York, the standardized math final exams for high school, known as ‘The Regents’ have been curved so that 30% was a passing score.  It didn’t used to be this way.  The relevant question is:  Are the uncurved scores so low because 1) The students don’t know the math, 2) The test was flawed, or 3) Both.

We can’t get a certain answer to that question because the tests were, in my opinion, very flawed.  If future tests can be improved, maybe we will learn that the students didn’t know the math very well either, but until the tests are fixed, we won’t know.

Last post, I went though three questions that I felt could have been improved in various ways and in this one I’ll examine some more. 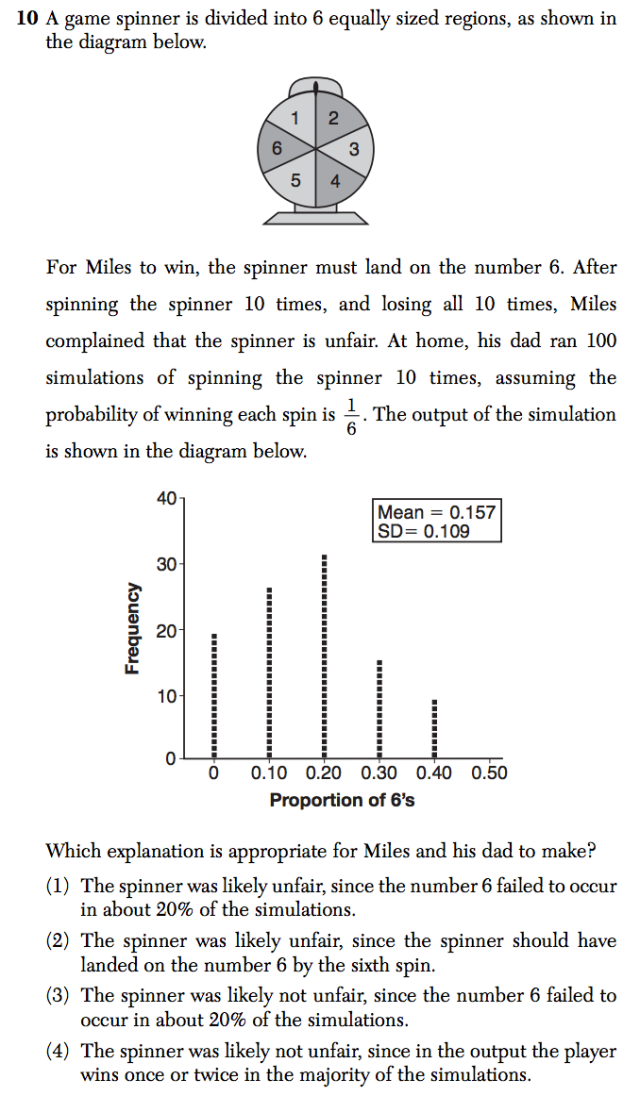 I think, as a rule of thumb, a 2 point multiple choice question should not take an entire page.  This is one of the new ‘common core’ topics that was borrowed from AP statistics.  The idea is that the results of a computer simulation of what to expect with a fair spinner is compared to what happens with the actual spinner and analyzed to determine whether or not is is likely that the actual spinner was fair.

The wording of the answer choices could cause someone who understands this topic to still get this question wrong and get 0 out of 2 points since there is no partial credit.  The double negative ‘The spinner was likely not unfair’ is one source of confusion.  Another issue with this is that both choices (3) and (4) reach the correct conclusion that the spinner is likely not unfair (or put a better way, likely fair) though a student would get no credit for putting choice (4).  This would be better as a long answer question where a student could get 2 points for the correct conclusion and 2 points for the correct reasoning which they could write out in their own words.

This is an example of trying to make something that should not be a multiple choice question into one that should.

Looking over this test I get the sense that the test makers are concerned about ‘regular’ multiple choice questions that may have been good in the days where students were not permitted to use calculators since they can legally ‘cheat’ by testing the answer choices if they don’t know how to solve with Algebra.  Maybe there should be a ‘no calculator’ section like on the SAT so those ‘regular’ question.  Or maybe there should be more free response questions and fewer multiple choices.

It’s not that this question is ‘unfair’ or ‘too hard’ but just that it is clearly written by someone who has no feel for math.  There is no reason to give the trig identity as there are two ways to solve this and if the student does not have the trig identity memorize, they can use the other method.

Also, this is not a good question because it really isn’t clear what the point of it is.  The question has trig functions in it, but it actually has nothing to do with trigonometry since the only property from trigonometry that is used is given in the problem, it is more of an algebra problem.

It’s hard to explain to non-math teachers, but this question is kind of like mathematical gibberish.  It doesn’t really serve any purpose.

This sort of question where you have to check if P(A)*P(B)=P(A and B) is a new topic added to the common core Regents.  It was always an application that we could have taught, but it seemed so contrived that I’m sure few people did.  Knowing it can be on the test, it is a pretty easy thing to spend a period on, especially since it has come up on each test for at least 2 points.

The issue here is that, like that spinner question, there are really only two choices, either it is independent or it isn’t.  But you can’t just have two choices so they threw in another concept, mutually exclusive, which some students may not have been aware of.  So a student who knows how to check for independence might still get this question wrong as they pick choice (4) instead of choice (2) figuring that this mysterious ‘mutually exclusive’ thing is probably part of the answer.  I think that a question like this should be a short answer question where the students can show their calculation and say whether they think the events are independent or not and leave it at that.

Perhaps you’re thinking right now “This guy’s a grump.  He can probably find fault with everything.”  But you’d be wrong.  There were a few ‘good’ questions on this test and I’d be perfectly happy if all the questions on the test were good.  It is very possible, as I wrote in the previous post, to make a fair test with good questions on this new curriculum.  Teachers do it all the time during the school year for their tests and quizzes.

For this one, there are some mathematical inaccuracies which I don’t mind so much, but I should mention that in reality the B and C should probably be the same number since the 12 month period of the weather and the ‘shift’ would be the same for an accurate model, but that’t not my issue with this question.  The problem is with the answer choices.

For choice (1) it is not clear what this ‘average monthly temperature variation’ is.  I guess they are talking about the amplitude of the function, but it’s not so clear to me (and definitely not to a high school student taking this test) that those two things are related, and how.

For choice (2), again, I have never heard the term ‘midline average monthly temperature’ before.

For choices (3) and (4), I haven’t heard of a ‘maximum average monthly temperature’ either.

This temperature application of sine curves is something that I like.  Maybe they should have just included one city and asked questions about that city without using technical jargon which I really think they made up for the test.

I’m sorry, but this question is a very stupid way to test if students know the two properties of exponents x^a/x^b=x^(a-b) and x^(-a)=1/x^a.  To have the expression written out in words is also unnecessarily confusing.  This test is a total of 86 points so to use 2 of those points, which is 1/43 of the entire test on this question makes no sense at all.  They revisit this topic in question 31 anyway in a free response.

One last note before ending this post, the big curve that made a 30% become a 65%, that curve was published before the tests were scored.  When in my career I ever gave a curve it was because I somehow messed something up.  I had a typo or some question was not worded well and I felt that it caused students to waste time so they deserved a curve.  But in this case they just made a shoddy test and then compensated with a ridiculous curve.  Much more accurate to make a reasonable test with no curve and then you can see if the students really learned the material.

3 Responses to What Happened To The Math Regents? Part II