More Reform Funded Research: KIPP Graduates Persist In College At The Same Rate As Their Mothers

Posted on January 12, 2020 by garyrubinstein

In The Alumni, Richard Whitmire says that charter schools that have 5 times the expected college completion rate are ones that only counted their students who persisted until 12th grade in their charter schools.  Since for some charter schools, this only represents about 25% of the students who started in that charter school, this even more of a biased sample.  But, Whitmire explains, the one network that has the most valid way of doing a fair comparison is the famed KIPP network.  Since KIPP counts, in their data, any students who enrolled in KIPP, even if they left soon after starting.  And he says that KIPP students, including ones who didn’t persist at KIPP, graduate college 3 times the expected rate.

But this Mathematica report includes some other relevant data that I didn’t pick up on when I wrote the last post.  Fortunately there was a discussion among some readers who commented on the last post which pointed this out.

In 2018 the National Center For Education Statistics published a report called ‘First-Generation Students College Access, Persistence, and Postbachelor’s Outcomes.’  In it they say that about 70% of students who have a parent who completed college also complete college compared to about 35% of students who do not have a parent who completed college.  This confirms what most people would expect for so many reasons and this is why we celebrate when students are the first in their family to graduate college.  It means that the descendants of those students will also be more likely to go to college.

In the Mathematica study, they collected statistics about the pool of students who applied to the KIPP lottery.  Among those statistics was the level of education attained by the mother of the KIPP lottery applicant.  Here’s what it says (page 6 of the report): 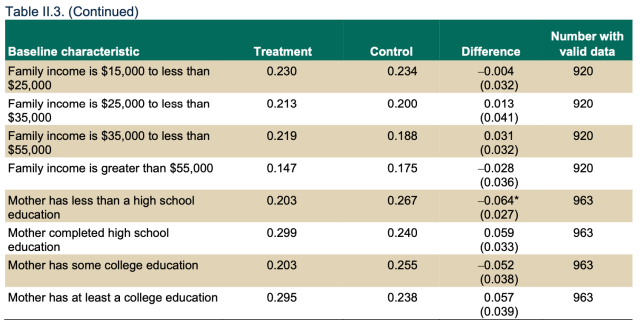 Notice that last line.  It says that of the students entering the lottery about 27% of them had mothers who finished college.  This makes the fact that about 30% of the students in the study (which includes students who got into KIPP and also students who did not get into KIPP) have persisted in college through four semesters even less surprising.

Someone like Richard Whitmire suggests in his analysis that has been quoted in USA Today and The Wall Street Journal, that had these students not gone to KIPP they would have only persisted in college at around 9%.  But it can be clearly seen now that even without going to KIPP, these students should be expected to have about a 30% college persistence rate.

Data, like what percent of charter school applicants have parents who are college graduates, are so important but nearly impossible to actually learn.  Thanks to the John Arnold Foundation for commissioning this study and shedding light on a truth that we already knew but didn’t yet have hard data to support.

3 Responses to More Reform Funded Research: KIPP Graduates Persist In College At The Same Rate As Their Mothers