The Life And Death Of The Terrible Education Reform Movement

Posted on January 16, 2020 by garyrubinstein

I’ve often thought, over these past eight years of following the politics of education, that one day this saga will make a great book.  What I didn’t expect was that that one day would be today. 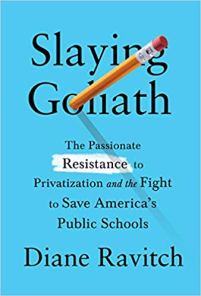 In ‘Slaying Goliath: The Passionate Resistance to Privatization and the Fight to Save America’s Public Schools’ (Knopf 2020, $27.95), education historian Diane Ravitch does the thing that she is best in the country at — taking a complex period of history in education and finding a way to turn it into a story with twists and turns worthy of great literature.

This book is like a sequel not to ‘Reign Of Error’ (2013) or even ‘The Death And Life Of The Great American School System’ (2010), but instead to the first book I had ever read by her, ‘Left Back: A Century Of Failed School Reforms’ (2000).  In that book, as she does in this one, Ravitch methodically weaves her way through the people and events that shaped the conflicts of education policy.  She is a master of brevity and I, as a pretty verbose blogger, marvel at how she can tell the story of such complex issues like the opt-out movement or the Massachusetts charter school ballot issue in just a few pages each.  It’s like watching one of those artists who with a few simple seeming strokes of a pencil captures the essence of her subject.  It looks so easy though of course it isn’t.

Watch as she summarizes twenty years of education reform in three paragraphs (!) on the third page of the book.

For nearly two decades, the “reformers” had promised a dramatic transformation in American education, based on their strategy of high-stakes testing, teacher evaluation by test scores, charter schools, and closing low-scoring public schools.  They confidently claimed that they knew the answers to all the vexing problems in education.  They asserted that they were leading the civil rights movement of our time, funded by billionaires, Wall Street titans, and the federal government, as if the elites would be leading a civil rights movement against the powerful (themselves!).  They insisted that when their remedies were imposed, America’s test scores would soar to the top of international rankings.  No longer would poor children be “trapped in failing schools.”  No more would children’s success be determined by their ZIP code or social status.  They all sang from a common hymnal about the failures of public education and proclaimed their certainty that they knew how to turn failure into high test scores for all.

But despite the investment of billions of federal, state, local, and philanthropic dollars, these malign efforts came up empty.  The leaders of this charade had confidently predicted that success was just beyond the horizon.  But as so often happens with mirages, the horizon kept receding farther away.  None of their promises and claims came true.  Judged by their own chosen metrics — standardized test scores — the fake ‘reformers’ failed

In this book, I will not call these activities and their leaders by the honorable word reform, which they have brazenly appropriated.  The individuals and groups who promote test-best accountability, school closings, and school choice as remedies for low test scores are not reformers.  What to call them?  Others call them “deformers” or the “financial privatization cabal” or the “Destroy Public Education Movement” or “privateers.”  Such groups and individuals often say their goal is to “disrupt” public education, and I think in this instance they have accurately named themselves.  They are Disrupters.  They are masters of chaos, which they inflict on other people’s children, without a twinge of remorse.

As someone who has been embroiled in this subject for the past eight years, I figured that I would be able to skim through this book.  I figured that I wasn’t really the audience for this book, it was for readers who can’t name the last three superintendents of the Tennessee Achievement School District off the top of their heads.  Yet I found myself learning something new on every page.  One particularly compelling, and frightening, section was the part about how billionaires funnel money into local school board races.  I had heard about this from time to time, but I never appreciated how much this is happening.   There were fascinating events that I somehow missed altogether when they occurred, like the Douglas County school board saga.  This is why Ravitch is such a master.  She absorbs all these events when they happen and then when it is time for her to don her ‘historian’ cap and to elevate 30,000 feet in a metaphorical hot air balloon and look down and see how the different pieces of this puzzle fit together in a way that us land dwelling mortals could never have the perspective to notice.

If I learned something new on almost every page, the average reader is going to have his mind completely blown by the narrative in this book.  It is a story of underdogs — regular people and most certainly NOT the big bad union who, lets face it, have not played much of a role in this — who stood up against the most powerful and the most wealthy people in the world and who said “No.  You are not going to destroy our schools.”  Against all odds, we see that the tide has turned

Throughout the book, Ravitch introduces the readers to a cast of characters that are only known to those of us who have been embroiled in this fight over the years.  We get to read short histories of people like Karen Lewis, Leonie Haimson, Anthony Cody, and others.  She paints them as heroes and shows how they fit into the big picture where every one of the heroes plays a small but important role.  The only hero that she does not give her due credit is herself — Diane Ravitch.  If someone else were to have written this history — and I don’t think there was anyone else alive who could have done this — Ravitch would have been recognized as THE key figure in taking down the ‘disruptors.’  Her blog with the tens of millions of hits, her Twitter following, and her books — including this new one — are not just recording history, they are making it.  The only mention she makes about her own role in leading the resistance was on page 68 where she wrote “I started my own blog in 2012 and use it as a platform to nationalize the struggle against privatization and high-stakes testing and to showcase the work of other bloggers in order to enable them to reach a larger audience.”

The fact that Ravitch had the energy to write this book after all else that she has done and continues to do is astonishing.  It is as if George Washington not only led the American efforts in the Revolutionary War, but if when it was nearly over he were to also write the definitive history about it.

In summary, this is a must read.  Whether you are just learning about these issues or if you are someone who has studied them for years, you will get so much out of this.  And you really want to get this and read it right away before everyone else starts talking about it and you’re going to feel very left out.

In the early 1500s Michelangelo completed his sculpture ‘David’.  Though it took 500 years for another genius to rival his, Diane Ravitch’s ‘Slaying Goliath’ is a masterpiece that will be studied and celebrated for generations.