But is that a lot?

The New York Post seems to think so.  Three times in a recent article they suggest that this is 100% of the seniors.  The title “Entire Success Academy senior class accepted to college” certainly implies it.  The first sentence “Every senior in one of the city’s largest charter school networks has been accepted to a college this year, officials said.” reinforces it.  And the second sentence “All 98 of the 12th graders at Success Academy’s HS of the Liberal Arts in Manhattan earned admission to universities — including Yale, Penn, Duke and Georgetown.” further drives the point home.

But a responsible reporter would ask the logical follow up question.  Is 98 really all the students in the class of 2020?

The answer, of course is, ‘no.’  What the actual number is depends on how you define the class of 2020.

If you go back to a New York Post editorial from just six months ago, it begins with the sentence “Seniors at the Success Academy HS of the Liberal Arts just got their SAT scores — and all 114 did great, with an average score of 1268, 200 points above the national average.”  So six months ago there were 114 seniors, which is 16 more than the 98 that are now called the ‘entire’ senior class.  For Success Academy to lose roughly one-seventh of the students who were in the senior class just six months ago is stunning.  These 16 students had been at the school since at least 3rd grade.  Where did those 16 students go? 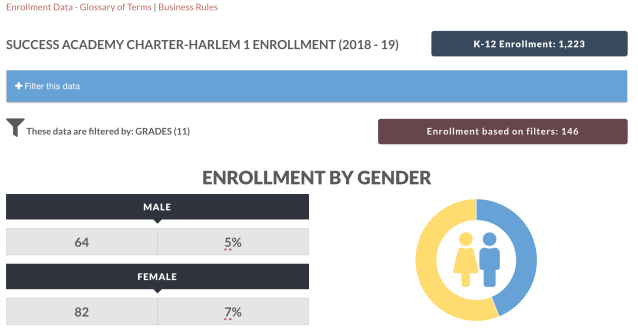 But Success Academy starts in Kindergarten.  For that you have to go way back to 2010 when they had 353 students in the class of 2020.  If you use that as your baseline then only 28% of the cohort persisted.

Regardless of how you want to define the ‘class of 2020,’ it is disingenuous of The New York Post to call this ‘all’ or ‘the entire class.’

All the data I found is publicly available here.